Faribon returns with the usual monthly appointment dedicated to the history and properties of cereals, to be consumed as they are or ground to have fresh and highly nutritious flour. Today we will discover rye, a very ancient and still relatively unknown cereal, much loved and cultivated in mountain countries.

Like many other cereals, rye for years has been considered food for the poor. It is also called mountain cereal and perhaps older than wheat.

Where did the rye come from? The history

The rye belongs to the family of the Poaceae (Graminacee) and is native to Asia Minor and Anatolia. Since the Bronze Age this cereal grew wild between barley and wheat. Then, during the fourth century B.C. it was found in northern and eastern Europe: for Celts and Germans it was the pillar of their feed, while it seems that Greeks and Romans did not appreciate its flavour, too intense for them, and reserved rye as feed for animals or to feed the plebs.

We find two main rye varieties, winter and summer; in both cases, its cultivation is decidedly easier than the wheat. The plant bears well cold, ventilated and dry climates; moreover, it does not require particularly fertile soils and easily adapts to any type of soil. It can withstand frosts up to -25°C.

What does rye contain? Properties

Nowadays, this cereal has been rediscovered and is spreading thanks to the beneficial properties it has on the body: it is rich in fiber, B vitamins (including folic acid) and mineral salts such as sodium, calcium, potassium and iodine.

Rye contains lysine an essential amino acid for our body. Often cereals do not contain lysine as opposed to legumes, so rye is an extraordinary cereal also for this reason.

Being rye rich in fiber is very useful for intestinal problems. Also important for its low glycemic index of 45, so it is also indicated for diabetics. A super food in short, that just for the type of fiber contained that gives satiety so it is useful even in case of low-calorie diet. Unfortunately, it is not suitable for celiacs because it contains gluten.

How to use rye

If you want to consume the rye directly in grains, for example in cold summer salads or in soups and meatballs, grains should be soaked at least 12 hours and then cooked in 4 or 5 parts of water for at least 50/60 minutes.

If you want to try 100% homemade preparations, thanks to Faribon you can have fresh rye flour every day: in fact, Faribon in one step separates bran and flour and thus keeps intact the nutritional properties of the rye bean.

If used for fresh pasta, black bread or cakes it is necessary to mix it with stronger flours. In fact, unlike wheat, it contains a gluten with a low "bakery attitude". Rye flour can be used 100% to obtain the classic black bread, or in mixture with other flour for general bakery products with a less marked taste.

For example, in Russia, black rye bread is more common than white bread. But not only that, we remember that rye is the most beloved cereal of the Dolomites, fantastic black rye bread with cumin seeds of the meadows, mullet, fennel.

Here you can find our recipe for rye bread, made with flour grinded with Faribon. 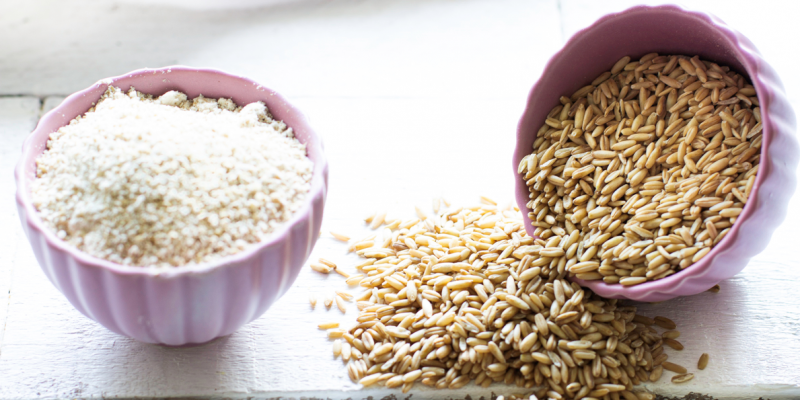 Contrary to the common mind, buckwheat is not a cereal but a spontaneous plant.  Naturally glut...